Popping In To Say Hello!

Since yesterday was Charlie's 2nd birthday and Ryker noticed it had been a YEAR since our last post... we decided to stop in and say hello!

Maybe... possibly... we will stop being all blog lazy. Although after a year "lazy" seems to be a bit of an understatement...  :)

We ARE still alive! And following everyones blogs! My laptop was hit by a lightening strike a month ago or so and its just purely annoying to use it... :)
In BIG NEWS Charlie's (and mine!) birthday is FRIDAYYY!
CHARLIE IS GOING TO BE ONE YEAR OLD!!!
I went birthday present shopping today :) Stay tuned for what I am  ambitiously thinking will be a birthday post!
Posted by Unknown at 6:35 PM 6 comments:

I promise a post with some pictures SOON! But I had a quick question/poll of sorts for ALL the fluffy owners in blogland...


What kind of vacuum do you use?
We have always had an Oreck and they used to work great, our 2yr old one broke and the new one has been fixed three times... It sucks at sucking. It especially sucks at sucking dog hair.

Charlie has lots of dog hair that he gleefully spreads throughout the house (with loves).

So we need some feedback! What kind of vacuum do you use in your house? What kind have you heard is best? The answer off the top of my head is Dyson but we'd like to keep it under $400!

Guess I have to grow up too!

Well, I finally did it.

Much to Charlie's dismay (until he sees all the fun things I'll buy him) I FINALLY got a "real" "big kid" job! YAAAAAaaayyyyy? Maybe the universe decided that if Charlie was grown up enough to handle some strangers I was grown up enough for a job?
I love the job.. but I don't love getting home at 5 every day! Poor Charlie! I'll have to get a puppy walking service when I move out of the nest... which will be when I'm confident Charlie will accept my generous gift of a stranger every day.. haha!
So if we are a bit sporadic (and slightly boring) in the next week or so we are just adjusting!
Speaking of adjusting... our first 'Advanced' obedience class is tomorrow. It's an open class that runs year round so we're basically jumping into a tank of sharks! Gulp! Good thing nubs can swim!
Posted by Unknown at 6:56 PM 2 comments: 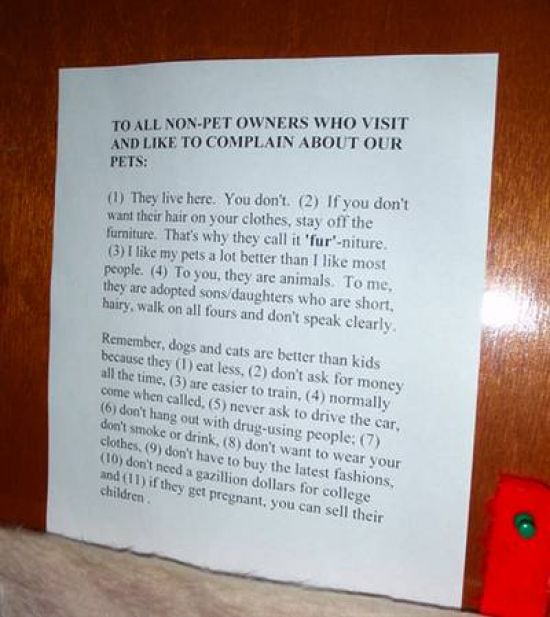 AND GUESS WHO PASSED WITH FLYING COLORS!!!!
The Drill Sergent (now called Sgt Susan because I love what she has done to my dog) said Charlie was one of the best prepared tonight and that he is DEFINITELY ready for the advanced class! She also said that she can really tell that I work with him and truly want him to get past his fear issues, and that Charlie is learning not only to lean on me (ie hide behind) but to trust me (ie I won't let monsters eat him). 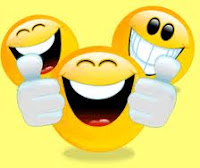 I must admit. I knew we were ready for 'the test'  tonight.. at least for what we practiced the week before! The hardest part was going to be when the dogs had to sit-stay in a large circle on the perimeter of the room while the owners walked a circle in the middle. Charlie was ready for that... but Sgt Susan threw in a monkey wrench. As the owners walked around they had to pet EVERY dog. gulp.
Charlie leaned this way... and leeaned that way... and gave a hell of a hairy eyeball to the men... but there was not one growl and he stayed the whole time. As dorky as it sounds I almost teared up with pride and happiness for him.
My Charlie isn't afraid <3 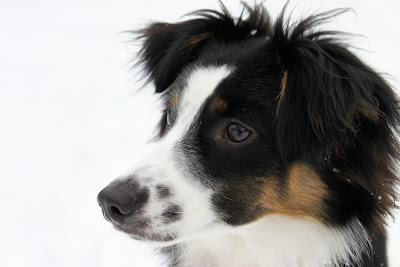 Since we've been in this class and watched Sgt Susan work her full size black tri Aussie afterwards I have really been thinking about getting into obedience trials. Sarge thinks this is a great idea and that Charlie could go far and it would only continue to build his confidence and break down his fear. So next week is our first Advanced Class!
Eight months ago one of the reasons I started this blog because I noticed Charlie was shy and wanted to get to know more Aussies. Six months ago I tried to stay positive but he was only getting worse.
And today my Charlie wasn't afraid... I'm so happy for my little nubs
Posted by Unknown at 7:18 PM 4 comments: 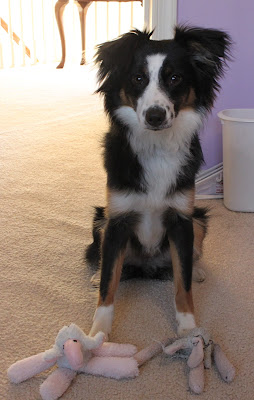 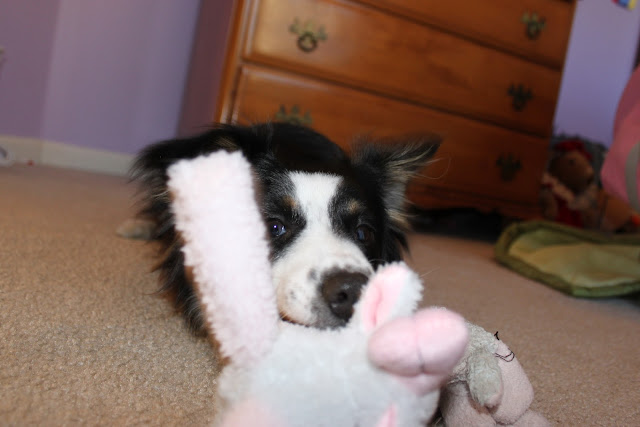 I asked mom to write a letter to the man who makes these... I would just die if they ever went out of production!!!
R.I.P. Sheepy II
Long Live Sheepy III
Posted by Unknown at 1:18 PM 6 comments:

Charlie Through the Months